1. ON THIS DAY IN HISTORY27th May 1199: The coronation of King JohnJohn was the youngest of the sons of Henry II and had never been groomed for the throne, inheriting it only because his brother Richard I had died without an heir.

John is considered one of the worst kings of England, brought about by his undiplomatic treatment of powerful figures, particularly his own barons. This led to a disastrous war with France in which all the northern territories in France were lost, leaving only Aquitaine in the south-east.

By 1215 the barons were in open revolt and John was forced to sign a Bill of Rights, the famous Magna Carta at Runnymede. John however subsequently had it annulled and civil war broke out again. The Barons invited Louis VIII of France to take the English throne and John was losing the war when he died in 1216.

With his death, the barons withdrew their support for Louis and the majority recognized John's infant son as Henry III as the new king, setting up a regency to rule on his behalf.

2. TODAY IN MY LIFE
Blogging
Ironing
Me Time
Shift 1 of the Weekend Job
Missus Time

New Followers followed back = 1
@JustMgznSpammers not followed back = 2@IHipnosis, @wypuvogibito,
3. TODAY'S SELF-OBSERVATIONIt's great to see Son recovering his morale so quickly, a matter of days after feeling gutted. I put this down mainly to excellent support. I also suspect that now standing outside of the relationship, he can clearly see that this was not Miss Right. Someone who has been deceiving you from start to finish is not a worthy life-partner. Freed of this failed relationship, he now has many opportunities open to him.

With helping Son through his breakup and indulging personal pleasures, whilst keeping house as usual, has made another week shoot by at high speed. I blinked and it is Friday again. I have accepted that the time remaining to be will zip by rapidly, and so instead focus on the difference made, which unashamedly includes getting my rocks off. I therefore count this week as a success!

I go into the weekend at peace with myself and therefore clutching life's greatest prize.

4. TODAY'S QUESTION FOR YOU
Are you making the difference you want to make?

5. TODAY'S WEATHER IN BRADFORD
In brief
Dry, cloudy and mild 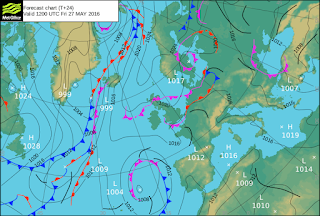 6. TODAY'S ONELINER
The chap who named the umbrella meant to call it a brella, but he hesitated. :D

8. TRIVIA
La Femme is an all-female beach in Egypt, away from the prurient view of men and cameras, where Muslim women can replace their long head and body coverings with bikinis without feeling as if they are sinning.

9. ZEN WISDOM
The Human mind is indeed wondrous. You may be ill physically, but as long as your spirit is strong, it most certainly will exert a positive influence on your body.
Posted by Gary Blonder at 23:19