1. ON THIS DAY IN HISTORY24th May 1956: The first Eurovision Song Contest
The Eurovision Song Contest 1956 was the debut edition of the Eurovision Song Contest, held at the Teatro Kursaal in Lugano, Switzerland on Thursday 24 May. Organised by the European Broadcasting Union, the pan-European music competition was an inspiration of the Italian Sanremo Music Festival. Lohengrin Filipello hosted the first contest which lasted approximately 1 hour and 40 minutes. Seven countries participated, with each of them performing two songs. Two jury members from all participating countries cast their votes in secret, based on which song was their favourite. Lys Assia won the contest for the host country Switzerland with the song "Refrain".

This first edition of the Eurovision Song Contest included several procedures that were not repeated in any subsequent edition: Two songs for each country, secret voting, double voting of one country on behalf of another, optional inclusion of the jury members' own represented country in their voting, only "Grand Prix" title reception for the winner, and a single male presenter to host the show. The other Contests include: One song for each country, scoreboard display, jury panel from each country, disqualification of the juries' own country from their voting, material award, and a single or additional female presenter.

The United Kingdom did not enter the first contest but entered for the first time in the following year, coming 6th in a field of ten.

New Followers followed back = 4
@artwiz, @april_golightly, @KeciaHambrick, @aswaafaSpammers not followed back = 2@lvagroup, @SevickJacquline
3. TODAY'S SELF-OBSERVATIONPoor Son! When you love your child, you go through whatever they go through with them. It's his first bad breakup and it doesn't help when his bank is making life unnecessarily difficult. But when you're going through Hell, the best response is to just keep right on going, and you eventually come through.

I can only be there if required, and let him get on with the business of getting through it, while in the meantime I address my own concerns. Time Greed is a major issue for me and frustration over it got the better of me yesterday. Fortunately by the time Missus got home I had regained composure, and Acceptance had kicked in - I have to let go of the time and opportunities I won't get and focus on what's available.

With the house to myself and focus centered, I can get on with the business of fulfilling my objectives.

4. TODAY'S QUESTION FOR YOU
Are you letting go of what's no longer available?

5. TODAY'S WEATHER IN BRADFORD
In brief
Dry, mild and sunny 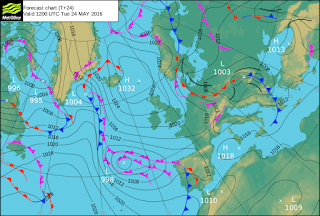 6. TODAY'S ONELINER
I like to put on a show where I dress up as a knight and jump over 25 parked cars riding a horse. I call myself Medieval Knievel :D

8. TRIVIA
Iraq has more than 22 million date palms and is one of the top three date producers in the world

9. ZEN WISDOM
Encouragement means to plant the seed of courage in the lives of others. It is an act of regeneration.
Posted by Gary Blonder at 23:38