1. ON THIS DAY IN HISTORY10th March 1876: The First Phone Call
The first successful bi-directional transmission of clear speech by Bell and Watson was made on March 10, 1876 when Bell spoke into the device, "Mr. Watson, come here, I want to see you." and Watson answered. Bell tested Gray's liquid transmitter design in this experiment, but only after Bell's patent was granted and only as a proof of concept scientific experiment to prove to his own satisfaction that intelligible "articulate speech" (Bell's words) could be electrically transmitted. Because a liquid transmitter was not practical for commercial products, Bell focused on improving the electromagnetic telephone after March 1876 and never used Gray's liquid transmitter in public demonstrations or commercial use.

Bell's telephone transmitter (microphone) consisted of a double electromagnet, in front of which a membrane, stretched on a ring, carried an oblong piece of soft iron cemented to its middle. A funnel-shaped mouthpiece directed the voice sounds upon the membrane, and as it vibrated, the soft iron "armature" induced corresponding currents in the coils of the electromagnet. These currents, after traversing the wire, passed through the receiver which consisted of an electromagnet in a tubular metal can having one end partially closed by a thin circular disc of soft iron. When the undulatory current passed through the coil of this electromagnet, the disc vibrated, thereby creating sound waves in the air.

This primitive telephone was rapidly improved. The double electromagnet was replaced by a single permanently magnetized bar magnet having a small coil or bobbin of fine wire surrounding one pole, in front of which a thin disc of iron was fixed in a circular mouthpiece. The disc served as a combined diaphragm and armature. On speaking into the mouthpiece, the iron diaphragm vibrated with the voice in the magnetic field of the bar-magnet pole, and thereby caused undulatory currents in the coil. These currents, after traveling through the wire to the distant receiver, were received in an identical apparatus. This design was patented by Bell on January 30, 1877. The sounds were weak and could only be heard when the ear was close to the earphone/mouthpiece, but they were distinct.


3. TODAY'S SELF-OBSERVATION
I was most pleased to note a proper night's sleep last night! This was particularly welcome after the previous night. A nice standard 2200 - 0500 interrupted only by the inevitable small-hours urination. I can feel the difference - everything seems to be "flowing" this morning. My aim now is to maintain that pattern.

I'm wondering if an orgasm in the early evening is the answer. We shall soon see - Thursday night is "Marital Quality Night" so we'll see if I sleep well tonight. However it is complicated by the fact that the magic blue tablets are needed to guarantee a successful event, and they can affect sleep.

Life in general is to me a fascinating adventure movie. Though there is NO WAY I would have chosen the path that led me here and I wouldn't choose it now either, I cannot deny it's led me to great place. However the great place will pass as with all things. I know exactly the hay I want to make while the sun is shining - to develop an attitude immune to circumstances - where the emphasis is on responding right to whatever is. Whereas what is constantly changes, right response is a constant.

My intention now is to always make the response that makes the best difference - to myself, the environment and others, and to choose that response intuitively. How wonderful to feel peace of mind and know what I'm doing and why I'm doing it. 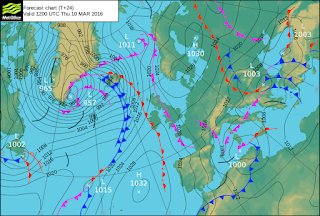 6. TODAY'S ONELINER
It's going to be a bad day when you find yourself putting on your trousers one arm at a time :D

9. ZEN WISDOM
Hardships make us strong. Problems give birth to wisdom. Sorrows cultivate compassion. Those who have suffered the most can become the happiest.
Posted by Gary Blonder at 22:55