1. ON THIS DAY IN HISTORY2nd March 1949The first circumnavigation of Earth by an aircraft
The Lucky Lady II was a functioning B-50 of the 43rd Bombardment Group, equipped with 12x 0.50 calibre (12.7mm) machine guns, with an additional fuel tank added in the bomb bay to provide additional range. The aircraft had a double crew with three pilots, with each crew taking a shift of four to six hours on duty and four to six hours off

The aircraft started its round-the-world trip with a crew of 14 under the command of Capt. James Gallagher at 12:21 PM on February 26, 1949, from Carswell Air Force Base near Fort Worth, Texas, heading east over the Atlantic Ocean.

After flying 23,452 mi (37,742 km), the aircraft passed the control tower back at Carswell AFB on March 2 at 10:22 AM, marking the end of the circumnavigation, and landed there at 10:31 AM after having been in the air for 94 hours and one minute, landing two minutes before the estimated time of arrival calculated at take-off.

Lieutenant General Curtis LeMay, Strategic Air Command's commanding general, was on hand to greet Lucky Lady II upon its arrival, together with dignitaries including Secretary of the Air Force W. Stuart Symington, Air Force Chief of Staff General Hoyt S. Vandenberg, and Major General Roger M. Ramey, commanding general of the Eighth Air Force. LeMay cited the significance of the mission as indicating that the Air Force now had the capability to take off on bombing missions from anywhere in the United States to "any place in the world that required the atomic bomb". He further stated that mid-air refueling could also be used for fighter aircraft. Symington noted that aerial refueling would "turn medium bombers into inter-continental bombers".


3. TODAY'S SELF-OBSERVATION
March is looking like a busy month for hypnotherapy, which of course brings a smile to my face! I absolutely love my job! I love the fact that I can do it, that I make a real difference with it and I get paid for it! Perfection! I have no complaints whatsoever!

I'm also pleased with the internal revolution going on in my head. My consciousness has come to terms with the fact that it doesn't run the show - it has just been fooled into thinking it does. The job of my consciousness is not captain but helmsman.

The real Boss is my subconscious, and fortunately its agenda is reasonably benevolent - to experience, make a difference and pass on learning. I may like to think I decided this one day, but the reality is the motivation has been steadily evolving subconsciously, moulded by events triggered by the Laws of Physics.

The most fundamental game-changer is the realization that that there is no "me" - there is only the universe made conscious. Furthermore this consciousness is blind - what I thought of as "reality" is only a map in my head drawn to make sense of the limited number of energy interactions this body can sense.

That nursery rhyme "row row row your boat" has it exactly right - life IS but a dream! It is however an awesome dream from this point of consciousness. I intend to keep focus on whatever my subconscious tells me to and continue to enjoy the movie.

4. TODAY'S QUESTION FOR YOU
How much about yourself do you really want to know? 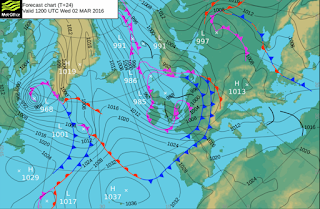 6. TODAY'S ONELINER
Fool me once, shame on you. Fool me twice, shame on me. Fool me 300,000 times, then you're probably a TV weather forecaster.

8. TRIVIA
The mines of South Africa can descend as far as 12,000 feet and reach temperatures of 130°F. To produce an ounce of gold requires 38 man hours, 1,400 gallons of water, enough electricity to run a large house for ten days, and chemicals such as cyanide, acids, lead, borax, and lime. In order to extract South Africa’s yearly output of 500 tons of gold, nearly 70 million tons of earth are raised and milled.

9. ZEN WISDOM
Rather than comparing your joys and sorrows to those of others, you should aim to surpass your limits in the situation you are in right now. Those who can do this are the true victors in life.