1. ON THIS DAY IN HISTORY6th June 1654: The abdication of Queen Christina of Sweden
Christina was the only surviving legitimate child of King Gustav II Adolph and his wife Maria Eleonora of Brandenburg. At the age of six, she succeeded her father on the throne upon his death at the Battle of Lützen, but began ruling when she reached the age of 18.

Christina is remembered as one of the most educated women of the 1600s. She was fond of books, manuscripts, paintings, and sculptures. With her interest in religion, philosophy, mathematics and alchemy, she attracted many scientists to Stockholm, wanting the city to become the "Athens of the North". She was intelligent, fickle and moody. She rejected the concept of a woman having sexual needs like men and caused a scandal when she decided not to marry, and even more so in 1654 when she abdicated her throne. She changed her name from Kristina Augusta Wasa when she converted to Roman Catholicism and adopted the name Christina Alexandra.

At the age of 28, she moved to Rome. She became a leading patron of the city's theatrical and musical life and supported many Baroque artists, composers, and musicians.

Being the guest of five consecutive popes, and a leading figure of the Counter Reformation, she is one of the few women buried in the Vatican grotto. Her unconventional lifestyle and masculine dressing and behaviour has been the subject of considerable speculation in novels, plays, opera and film.

New Followers followed back = 3
@MichaelLevy, @EMewe, @OhKimKimKimSpammers not followed back = 2@tabatha87121631, @Allegraspna
3. TODAY'S SELF-OBSERVATIONIn an interesting Sunday I got frustrated over inadequate time, lost it which made matters worse, then realizing what was happening, just stopped and re-grounded myself, focusing on the difference I was making in the moment, and everything got better!

I don't know whether to be annoyed at myself for losing it or to congratulate myself for a complete regaining of composure. I guess there has to be acceptance of my flaws, weaknesses, and vulnerabilities. They are after all not my fault - I didn't ask for them! Resenting their presence will lead only to self-loathing and therefore self-destruction, which is in the interest of no one except my enemies.

Having accepted the Yin-Yang package which this avatar is, a microcosm of the whole universe, it's about responding appropriately and intuitively to what I encounter, both internally and externally. This response needs to include adequate meditation - it was neglected over half-term what with the other two being under my feet, and it feels like a layer of skin has sloughed off. I am making a priority of making meditation a priority and growing that skin back!

4. TODAY'S QUESTION FOR YOU
Are you doing what's necessary to keep yourself healthy? 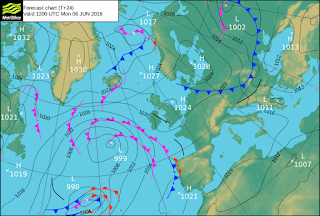 6. TODAY'S ONELINER
The town of Whitby is where you fight with seagulls to see who gets your fish & chips :D

8. TRIVIA
Marrying younger than age 25 dramatically raises the divorce risk. Also, the divorce risk is higher when the woman is much older than the man, though the reverse isn’t as a strong factor.

9. ZEN WISDOM
Spend as much time ordering your inner life as your outer one
Posted by Gary Blonder at 23:34