1. ON THIS DAY IN HISTORY
28th June 1914: The Assassination at Sarajevo
The assassination of Archduke Franz Ferdinand of Austria, heir presumptive to the Austro-Hungarian throne, and his wife Sophie, Duchess of Hohenberg, occurred on 28 June 1914 in Sarajevo when they were shot dead by Gavrilo Princip. Princip was one of a group of six assassins (five Serbs and one Bosniak) coordinated by Danilo Ilić, a Bosnian Serb and a member of the Black Hand secret society. The political objective of the assassination was to break off Austria-Hungary's South Slav provinces so they could be a new nation of Yugoslavia. The assassins' motives were consistent with the movement that later became known as Young Bosnia. The assassination led directly to the First World War when Austria-Hungary subsequently issued an ultimatum to the Kingdom of Serbia, which was partially rejected. Austria-Hungary then declared war.

In charge of these Serbian military conspirators was Chief of Serbian Military Intelligence Dragutin Dimitrijević, his right-hand man Major Vojislav Tankosić, and the spy Rade Malobabić. Tankosić armed the assassins with bombs and pistols and trained them. The assassins were given access to the same clandestine network of safe-houses and agents that Malobabić used for the infiltration of weapons and operatives into Austria-Hungary.

The assassins, the key members of the clandestine network, and the key Serbian military conspirators who were still alive were arrested, tried, convicted and punished. Those who were arrested in Bosnia were tried in Sarajevo in October 1914. The other conspirators were arrested and tried before a Serbian court on the French-controlled Salonika Front in 1916–1917 on unrelated false charges; Serbia executed three of the top military conspirators. Much of what is known about the assassinations comes from these two trials and related records.

The assassin himself, Gavrilo Princip, was too young by 20 days under Habsburg law to be executed, and was instead sentenced to a minimum of 20 years in prison. Kept under harsh conditions and under-nourished, Princip made several suicide attempts before dying of Tuberculosis on 28th April 1918

3. TODAY'S SELF-OBSERVATION
My life-purpose is clear and twofold: the spreading of memes via hypnotherapy and social media, and the care of my mentally ill wife. To enable me to do this, maintenance tasks are also required. Having such clear purposes, a clear sense of self, and a sound personal philosophy free of contradictions and paradoxes adds up to Peace of Mind, life's greatest prize.

I don't attribute reaching my own personal Shangri-La to any greatness within myself. I reject completely the concept of free will and ultimately it's just Physics. This avatar is particularly grateful that it's had the experience of seeing things how they are, rather than be lost in the waking dream of living, and spread that knowledge as seeds ready to be grown in suitably fertile minds.

4. TODAY'S QUESTION FOR YOU
Is it more important to live or to know why?

5. TODAY'S WEATHER IN BRADFORD
In brief
After a bright sunny start, heavy rain arrives in the afternoon, though it will pass in the evening 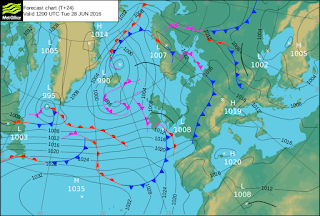 6. TODAY'S ONELINER
What you really learn from marriage counseling is that you’re not the only person your spouse won’t listen to.

8. TRIVIA
There are 100,000 miles of blood vessels in the adult human body