1. ON THIS DAY IN HISTORY
14th June 1645: The Battle of Naseby
The English Civil War had been raging since 1642. At the beginning of 1645, the Royalists were well aware that Oliver Cromwell was forming the New Model Army.

The king's advisors recommended that this army was attacked before it became an effective fighting force, but the king sided with Prince Rupert who wanted to march north and recover the Northern England, which had been lost after the Battle of Marston Moor, then link up with Scottish Royalists led by the Marquess of Montrose.

However, with the king's capital of Oxford being besieged and close to surrender to the Parliamentarian army under Sir Thomas Fairfax, the Royalists stormed and captured Leicester to distract Fairfax. Flushed with the success of this, the Royalists decided to abandon the march north and instead march to Newark to reinforce then south-west to relieve Oxford.

Parliament was alarmed by the loss of Leicester and ordered Fairfax to abandon the siege of Oxford and march east to engage the advancing Royalist army. A skirmish between scouting Parliamentarian cavalry and Royalists at Daventry on the 12th June alerted the king, now at Market Harborough, to the advance of Fairfax. The next day, Oliver Cromwell, now Lieutenant-General, arriving with some cavalry reinforcements, linked up with Fairfax and joined a quickly-convened council-of-war, which decided to engage the Royalists as soon as possible.

Fairly late into 13th June, a Parliamentary detachment under Henry Ireton (Cromwell's Son-in-Law) attacked a Royalist detachment at Naseby, leaving the king with a dilemma - retreat with Fairfax in hot pursuit (favoured by Price Rupert) or engage Fairfax now before being at full strength (favoured by Lord Digby). The king decided that retreat would be too damaging to his army's morale and therefore to stand and fight at Naseby.

Superior tactics orchestrated by Cromwell and unwise tactics led to a crushing and decisive Parliamentarian victory, with many Royalist slaughtered during their retreat.

Fairfax recovered Leicester five days later and also the king's baggage train. Clear evidence was discovered that the king was going to appeal to Irish Catholics and Catholic countries decreased popular support for the king.

With the main English Royalist army completely destroyed, it remained only to mop up Royalist strongholds piecemeal and the war was over within a year.

Poor decisions by the king, excellent military tactics by Cromwell and the refusal by Lord Goring to bring the Royalist army in the West Country to reinforce the king's main army all contributed to the decisive result at Naseby.

New Followers followed back = 0
-Spammers not followed back = 0-
3. TODAY'S SELF-OBSERVATIONWell that was close! I did everything else or had everything else planned, then late afternoon, I suddenly realized I hadn't got Missus a card. It was only in that moment the need for a card finally occurred to me. Now THAT'S an age thing - I've never done that before, or possibly because my fetish had been on my mind recently. Yes I have one - several in fact, such as Goths missionary position porn and shinywear, but one is a little more "exotic" than the rest - don't worry, it doesn't involve children, infidelity or danger, (I'm not sexually attracted to any of these) and is harmless, but it's the one thing I'm not going to discuss other than tease you with its existence. It is the "Man Shed" of my mind, the one thing I don't share. Even with other indulgers I communicate via a sockpuppet alter-ego

My fetishes help give my flagging libido a "push" to keep it moving along - but though they arouse sexual interest, my flaccid penis still needs assistance, except, somewhat annoyingly, when I need the "wee at three (am!)"

My exotic fetish recently got a boost when a fellow online indulger gave me access to his large collection of multimedia. Exploring it has somewhat distracted me of late! This partly contributed to nearly forgetting Missus card and has certainly distracted me from online business promotion. However I have ZERO GUILT - I'm enjoying life, and I'm not neglecting my role of carer/housekeeper. I always have the mental strength to "break off" from a pleasure when I need to get stuff done. As the novelty of my new source wears off, balance will restore itself.

4. TODAY'S QUESTION FOR YOU
Are you at peace, loving and accepting of who you are?

5. TODAY'S WEATHER IN BRADFORD
In Brief
Dry and cloudy, showers around dusk 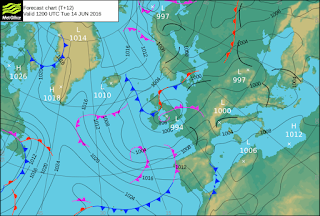 6. TODAY'S ONELINER
Hard to describe to you this amazing colour I saw last night, but it turns out it was only a pigment of my imagination. :D

8. TRIVIA
The peak relationship breakup times are two weeks before Christmas and the beginning of March.

9. ZEN WISDOM
You have no right to choose the cards dealt, only a duty to play your cards wisely.
Posted by Gary Blonder at 01:46