1. ON THIS DAY IN HISTORY30th June 1860: The Oxford Evolution Debate
The 1860 Oxford evolution debate took place at the Oxford University Museum in Oxford, England, on 30 June 1860, seven months after the publication of Charles Darwin's On the Origin of Species. Darwin himself was unable to attend due to illness. Several prominent British scientists and philosophers participated, including Thomas Henry Huxley, Bishop Samuel Wilberforce, Benjamin Brodie, Joseph Dalton Hooker and Robert FitzRoy. The debate is best remembered today for a heated exchange in which Wilberforce supposedly asked Huxley whether it was through his grandfather or his grandmother that he claimed his descent from a monkey.

Huxley is said to have replied that he would not be ashamed to have a monkey for his ancestor, but he would be ashamed to be connected with a man who used his great gifts to obscure the truth.

The encounter is often known as the Huxley–Wilberforce debate or the Wilberforce–Huxley debate, although this description is somewhat misleading. Rather than being a formal debate between the two, it was actually an animated discussion that occurred after the presentation of a paper by John William Draper of New York University, on the intellectual development of Europe with relation to Darwin's theory (one of a number of scientific papers presented during the week as part of the British Association's annual meeting). Although Huxley and Wilberforce were not the only participants in the discussion, they were reported to be the two dominant parties. No verbatim account of the debate exists, and there is considerable uncertainty regarding what Huxley and Wilberforce actually said.

At some point today I must therefore catch up and pay off some sleep debt. However, it has been a triumphant first half of the week for my Hypnotherapy Practice and life in general. It has left me fulfilled and grateful and put this morning's unwanted early start into context.

Yesterday evening, the whole family and the two cats were settled in the front room. Son was making me laugh and everyone else just made me happy. It was one of those perfect moments of contentment that I will always remember. At this moment there is absolutely nothing missing from my life - apart from a little sleep! 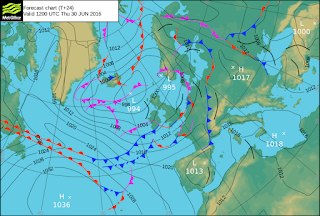 8. TRIVIA
The name “Earth” comes from Old English and Old High Germanic words (eorthe and erda, respectively) for “ground” or “soil,” and it is the only name for a planet of the solar system that does not come from Greco-Roman mythology.

9. ZEN WISDOM
The part of you that is listening is the only part that's really you.
Posted by Gary Blonder at 21:21