1. ON THIS DAY IN HISTORY21st June 2004: The first privately-funded manned spaceflight
SpaceShipOne is an experimental air-launched rocket-powered aircraft with suborbital flight capability that uses a hybrid rocket motor. The design features a unique "feathering" atmospheric reentry system where the rear half of the wing and the twin tail booms folded upward along a hinge running the length of the wing; this increased drag while remaining stable. SpaceShipOne completed the first manned private spaceflight in 2004. That same year, it won the US$10 million Ansari X Prize and was immediately retired from active service. Its mother ship was named "White Knight". Both craft were developed and flown by Mojave Aerospace Ventures, which was a joint venture between Paul Allen and Scaled Composites, Burt Rutan's aviation company. Allen provided the funding of approximately US$25 million.

Rutan has indicated that ideas about the project began as early as 1994 and the full-time development cycle time to the 2004 accomplishments was about three years. The vehicle first achieved supersonic flight on December 17, 2003, which was also the one-hundredth anniversary of the Wright Brothers' historic first powered flight. SpaceShipOne's first official spaceflight, known as flight 15P, was piloted by Mike Melvill. A few days before that flight, the Mojave Air and Space Port was the first commercial spaceport licensed in the United States. A few hours after that flight, Melvill became the first licensed U.S. commercial astronaut. The overall project name was "Tier One" which has evolved into Tier 1b with a goal of taking a successor ship's first passengers into space within the next few years.

The achievements of SpaceShipOne are more comparable to the X-15 than orbiting spacecraft like the Space Shuttle. Accelerating a spacecraft to orbital speed requires more than 60 times as much energy as accelerating it to Mach 3. It would also require an elaborate heat shield to safely dissipate that energy during re-entry.

New Followers followed back = 0
-Spammers not followed back = 6@25028fulid, @hibaquqezaru, @hibaquqezaru, @B0BadaDumDumCh, @kzcBloodnswash, @adriantywxsn
3. TODAY'S SELF-OBSERVATIONWhen I was training to be a Hypnotherapist, I realized that I was "born to do this" - it fitted me perfectly. I have held that view ever since. When I have clients to see, it focuses the mind wonderfully. Being convinced of your purpose and fulfilling that purpose causes you to live life to the full. Where you don't know why you're here or can't do it, the mind can wander into all manner of unhealthy places.

My YinYang philosophy and experience enables me to appreciate things by having experienced their opposite. It is the destiny of this avatar to sit at the very fulcrum of the universe, to see both sides of things and opposite scales stretching to infinity in their particular dimension.

I have to this point resented the traumas of the past, and would have preferred happy ignorance, but the more time I spend with my mind here at the fulcrum, the more the past becomes increasingly irrelevant, just a stepping stone on the way to here.

Crucial to this enhanced vision is MEDITATION - I have no idea how it does it, but meditation practiced regularly gives you a clear mind. I have now experienced life without it, with it, and what happens when you neglect it! I will never neglect meditation again, because I can see the difference it makes to me, even though I don't understand the mechanism - but I don't need to, I only need to appreciate what it does!

Thanks to all that I have learned, my mind is now steering my life along the best possible course.

4. TODAY'S QUESTION FOR YOU
Is your life making progress in the direction you want it to go?

5. TODAY'S WEATHER IN BRADFORD
In brief
Dry and mild with sunny intervals 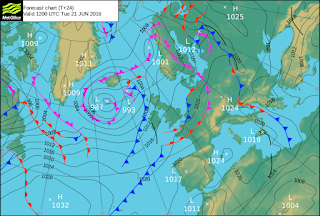 7. NOW THAT'S FUNNY!
Christine Little on being a cocktail waitress

8. TRIVIA
In 1984, New Zealand's Prime Minister got drunk and called a snap General Election - he lost.

9. ZEN WISDOM
Your life is steered by your focus
Posted by Gary Blonder at 22:54