1. ON THIS DAY IN HISTORY9th July 1283: The Battle of Malta
The Battle of Malta took place in the entrance to the Grand Harbour, the principal harbour of Malta, as part of the War of the Sicilian Vespers. An Aragonese fleet of galleys, commanded by Roger of Lauria, attacked and defeated a fleet of Angevin galleys commanded by Guillaume Cornut and Bartholomé Bonvin.

The Angevin ships arrived in Malta first, and proceeded to relieve the Angevin garrison, which was under siege. The galleys were followed in close pursuit by an Aragonese fleet. Roger of Lauria easily out-maneuvered the Angevin-Provençal fleet, and destroyed almost all of Cornut and Bonvin's vessels. Lauria then sailed back northwards, making a demonstration off Naples, raided the neighbouring coast, attacked and then garrisoned Capri and Ischia. The crushing defeat forced Charles I of Naples to postpone his plan to invade Sicily.

Due to the superior Aragonese navy, the Angevins never did invade Sicily, and the island was ceded permanently to Aragon when the war ended in 1302.

New Followers followed back = 2
@scormix, @chriswharramSpammers not followed back = 3@datapath_io, @GetCLAMScom +1 untraced
3. TODAY'S SELF-OBSERVATIONI'm now getting used to not doing anything - my body and subconscious are still beavering away of course, and that's what people observe, but my consciousness is just enjoying the movie. Having complete faith that my subconscious knows what it's doing, I don't worry about anything, just watch this avatar respond.

I am now fully aware that there isn't a "me" at all, just a consciousness generated by this brain and an experience called "me". I no longer believe in a Universal Consciousness, but rather in Information that through a human mind can be focused, processed and proliferated. It is INFORMATION that is truly eternal, and consciousness is its child - this consciousness continually reproduces and evolves perspectives.

"I" am simply a temporary lens for information, who will leave behind reprocessed information for other lenses to subsequently process. How fascinating! It's wonderful to have soared such heights of awareness, way above the average clueless consciousness.  But arrogance is fading, because with growing awareness I see it's all just Physics. There is no free will, everything is just following the dictates of Information manifesting.  In this temporary manifestation, Information is enjoying seeing itself!

4. TODAY'S QUESTION FOR YOU
How much do you really want to know? 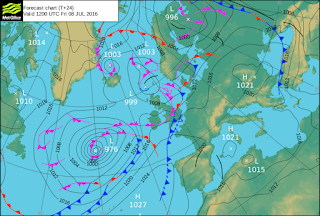 6. TODAY'S ONELINER
People keep questioning the accuracy of my CV - I never had to face this sort of scrutiny when I was an astronaut :D

8. TRIVIA
In present-day Saudi Arabia, Iran, and Pakistan, a girl who loses her virginity before her wedding day may be legally punished or murdered along with her lover by the males of her own family. "Honour killings" where women are murdered by her male family members for unapproved sexual activity, occur in Muslim communities worldwide.

9. ZEN WISDOM
Truth is no respecter of convenience.
Posted by Gary Blonder at 00:05