Also available - EMOTIONAL MANAGEMENT FOR ORDINARY FOLK - WISDOM, HUMOUR, AND LOTS OF OTHER INTERESTING STUFF CAN BE FOUND ON MY PINTEREST PAGE and FACEBOOK PAGE
TO FIND OUT WHAT I DO, CHECK OUT MY WEBSITE

1. ON THIS DAY IN HISTORY21st July 1861: The First Battle of Bull Run
The First Battle of Bull Run, also known as Battle of First Manassas (the name used by Confederate forces), was fought on July 21, 1861 in Prince William County, Virginia, near the city of Manassas, not far from Washington, D.C. It was the first major battle of the American Civil War. The Union's forces were slow in positioning themselves, allowing Confederate reinforcements time to arrive by rail. Each side had about 18,000 poorly trained and poorly led troops in their first battle. It was a Confederate victory followed by a disorganized retreat of the Union forces.

Just months after the start of the war at Fort Sumter, the Northern public clamored for a march against the Confederate capital of Richmond, Virginia, which they expected to bring an early end to the rebellion. Yielding to political pressure, Brig. Gen. Irvin McDowell led his unseasoned Union Army across Bull Run against the equally inexperienced Confederate Army of Brig. Gen. P. G. T. Beauregard camped near Manassas Junction. McDowell's ambitious plan for a surprise flank attack on the Confederate left was poorly executed by his officers and men; nevertheless, the Confederates, who had been planning to attack the Union left flank, found themselves at an initial disadvantage.

Confederate reinforcements under Brig. Gen. Joseph E. Johnston arrived from the Shenandoah Valley by railroad and the course of the battle quickly changed. A brigade of Virginians under the relatively unknown brigadier general from the Virginia Military Institute, Thomas J. Jackson, stood their ground and Jackson received his famous nickname, "Stonewall Jackson". The Confederates launched a strong counterattack, and as the Union troops began withdrawing under fire, many panicked and the retreat turned into a rout. McDowell's men frantically ran without order in the direction of Washington, D.C.

Both armies were sobered by the fierce fighting and many casualties, and realized the war was going to be much longer and bloodier than either had anticipated, and not the short conflict that had been expected. The Battle of First Bull Run highlighted many of the problems and deficiencies that were typical of the first year of the war. Units were committed piecemeal, attacks were frontal, infantry failed to protect exposed artillery, tactical intelligence was nil, and neither commander was able to employ his whole force effectively. McDowell, with 35,000 men, was only able to commit about 18,000, and the combined Confederate forces, with about 32,000 men, committed only 18,000

Life continues to be blissful, which to an outside observer makes for a dull story I fear. And long may life be fabulously uneventful! The peace of mind I feel is indescribably brilliant. While life's challenges swirl around me, here at the centre I remain wonderfully untouched. While it lasts, I will utilize it to make the maximum possible difference.

4. TODAY'S QUESTION FOR YOU
What would bring you peace of mind?

5. TODAY'S WEATHER IN BRADFORD
In brief
Dry with sunny spells in the morning 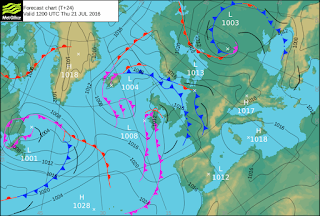 6. TODAY'S ONELINER
Why has no one invented a keyboard with a removable crumb-tray? :D

8. TRIVIA
Heart disease accounts for 40% of all U.S. deaths, more than all forms of cancer combined.

9. ZEN WISDOM
Nothing is only an idea that has no basis in reality - there's always something.
Posted by Gary Blonder at 23:29