1. ON THIS DAY IN HISTORY5th July 1946: The Introduction of the Bikini
With a fabric shortage still a problem due to World War 2, and in an endeavour to resurrect swimwear sales, French designer Louis Réard  launched a new two-piece swimsuit range in 1946. which he called the bikini.

His initial design consisted of a bra and two triangular pieces of newspaper-type print fabric connected by strips of material. The Bikini, with a total area of 30 square inches (200 cm2) of cloth, was advertised as "smaller than the smallest swimsuit". When he was unable to find a model willing to showcase his revealing design, Réard hired Micheline Bernardini, a 19-year old nude dancer from the Casino de Paris. Bernardini received 50,000 fan letters.

Réard said that "like the [atom] bomb, the bikini is small and devastating". Fashion writer Diana Vreeland described the bikini as the "atom bomb of fashion". In advertisements he declared the swimsuit could not be a genuine bikini "unless it could be pulled through a wedding ring." French newspaper Le Figaro wrote, "People were craving the simple pleasures of the sea and the sun. For women, wearing a bikini signaled a kind of second liberation. There was really nothing sexual about this. It was instead a celebration of freedom and a return to the joys in life."

Modern bikinis were first made of cotton and cotton/wool blends.

New Followers followed back = 4
@jameshannan, @AlejandroLanus, @christhompsonwv, @benny7751Spammers not followed back = 4@NutriAlternativ, @TraxPack, @DigitalDoodlerz, @laraprincesss
3. TODAY'S SELF-OBSERVATIONMissus is still "siren looning" but at least phones me while doing it so I can refuse her permission to come home. Son is having a surprisingly good time in Belarus, and Daughter has responded positively to "diplomatic relations", so all is reasonably well on the family front.

I can thus focus on the stuff I myself have to do. My own mental health has an unhealthy default, so requires daily disciplines to keep my mind healthy. These I'm doing, and I know full well I cannot afford not to do them.

What I'm really loving about this life experience is being a difference-maker to people who are now counting on me. That's a big incentive to look after myself and keep on keeping on. I've passed through the phase of frustration at the ignorance of the masses to be focused on what I myself am doing.

I am well-protected from arrogance by being highly conscious of my own vulnerabilities. I can be easily broken I'm very grateful for every day that I'm not.

4. TODAY'S QUESTION FOR YOU
Do you appreciate your own worth and capacity to make a difference?

5. TODAY'S WEATHER IN BRADFORD
In brief
Dry with sunny spells, skies clearing in the evening 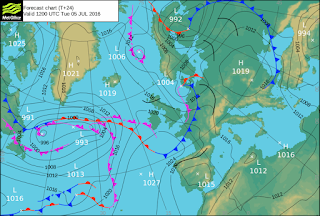 6. TODAY'S ONELINER
Nothing says I have faith in God like the bullet proof glass on the Popemobile. :D

7. NOW THAT'S FUNNY!
Blackadder Back And Forth

8. TRIVIA
People with red hair have twice the risk of developing Parkinson’s Disease.

9. ZEN WISDOM
Become Enlightened and you will die - only consciousness will remain
Posted by Gary Blonder at 23:37