Also available - EMOTIONAL MANAGEMENT FOR ORDINARY FOLKWISDOM, HUMOUR, AND LOTS OF OTHER INTERESTING STUFF CAN BE FOUND ON MY PINTEREST PAGE and FACEBOOK PAGE
TO FIND OUT WHAT I DO, CHECK OUT MY WEBSITE

1. ON THIS DAY IN HISTORY19th July 1916: The Battle of Fromelles
This was a British military operation on the Western Front during World War I, subsidiary to the Battle of the Somme.[a] General Headquarters (GHQ) of the British Expeditionary Force (BEF) had ordered the First Army and Second Army to prepare attacks to support the Fourth Army on the Somme 80 kilometres (50 mi) to the south, to exploit any weakening of the German defences opposite. The attack took place 16 kilometres (9.9 mi) from Lille, between the Fauquissart–Trivelet road and Cordonnerie Farm, an area overlooked from Aubers Ridge to the south. The ground was low-lying and much of the defensive fortification of both sides consisted of breastworks, rather than trenches.

The operation was conducted by XI Corps of the First Army with the 61st Division and the 5th Australian Division, Australian Imperial Force (1st AIF) against the 6th Bavarian Reserve Division, supported by two flanking divisions of the German 6th Army. Preparations for the attack were rushed, the troops involved lacked experience in trench warfare and the power of the German defence was significantly underestimated, the attackers being outnumbered 2:1. The advance took place in daylight, against defences overlooked by Aubers Ridge, on a narrow front which left German artillery on either side free to fire into the flanks of the attack. A renewal of the attack by the 61st Division early on 20 July was cancelled, after it was realised that German counter-attacks had already forced a retirement by the Australian troops to the original front line.

On 19 July, General von Falkenhayn, the German Chief of the General Staff, had judged the British attack to be a long-anticipated offensive against the 6th Army. On the next day when the effect of the attack was known and a captured operation order from XI Corps revealed the limited intent of the operation, Falkenhayn ordered the Guard Reserve Corps to be withdrawn to reinforce the Somme front. The Battle of Fromelles had inflicted some losses on the German defenders but gained no ground nor deflected many German troops bound for the Somme. The attack was the début of the AIF on the Western Front and the Australian War Memorial described the battle as "the worst 24 hours in Australia's entire history". Of 7,080 BEF casualties, 5,533 losses were incurred by the 5th Australian Division; German losses were 1,600–2,000, with 150 taken prisoner.

New Followers followed back = 1
@ProsperPlentySpammers/Bots not followed back = 4@smeethjaqub +3 untraced
3. TODAY'S SELF-OBSERVATIONA sure sign that I love my job is that I spent 2 hours with a client, thoroughly enjoyed it and it seemed like two minutes had passed. THIS IS WHAT I DO!!

Because it's still a job, I still sometimes the preference urge for free time, but once I get doing it, it flows beautifully. Doing something that fits so well with me has raised me to knew heights of blissful peace of mind.

But I'm not naive! I'm fully aware of the dynamic, temporary ephemeral nature of things, my vulnerabilities and fragility, but WHILST THE SUN SHINES I will make my maximum difference and create wonderful memories to keep. Mood was further raised by a great quality time with Son and a deepening of our relationship.

Whatever past or future, I have had my turn at bliss, for which I'm most profoundly grateful, and whatever the future, I will continue to make the maximum difference possible.

4. TODAY'S QUESTION FOR YOU
Are you making the maximum possible difference? 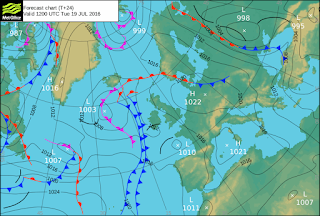 6. TODAY'S ONELINER
The computers were down at last week, so we had to do everything manually. It took me 20 minutes to shuffle the cards to play solitaire. :D

7. NOW THAT'S FUNNY!
John Oliver on the Irish Gay Referendum and The Pope

9. ZEN WISDOM
Don't miss Bliss because you're too busy looking for the next one.
Posted by Gary Blonder at 23:19