1. ON THIS DAY IN HISTORY
3rd July 1940: The Attack on Mers-el-Kebir
The Attack on Mers-el-Kébir, part of Operation Catapult and also known as the Battle of Mers-el-Kébir, was a British naval bombardment of the French Navy (Marine nationale) at its base at Mers El Kébir on the coast of what was then French Algeria on 3 July 1940. The raid resulted in the deaths of 1,297 French servicemen, the sinking of a battleship and the damaging of five other ships.

The combined air-and-sea attack was conducted by the Royal Navy as a direct response to the Franco-German armistice of 22 June, which had seen Britain's sole continental ally replaced by a collaborationist, pro-Nazi government administrated from Vichy. The new Vichy government had also inherited the considerable French naval force of the Marine Nationale; of particular significance were the seven battleships of the Bretagne, Dunkerque and Richelieu classes, which collectively represented the second largest force of capital ships in Europe behind the British.

Since Vichy was seen by the British as a mere puppet state of the Nazi regime, there was serious fear that they would surrender or loan the ships to the Kriegsmarine, an outcome which would largely undo Britain's tenuous grasp on European naval superiority and confer a major Axis advantage in the ongoing Battle of the Atlantic. Despite assurances from Admiral Darlan, the Commander of the French Navy, that the fleet would remain under French control and out of the hands of the Germans, Winston Churchill, still reeling from Dunkirk and stung by the Vichy French collaboration, determined that the fleet was simply too dangerous to remain intact, French sovereignty notwithstanding.

Arriving off Mers-el-Kebir, The British fleet issued an ultimatum to the French - Scuttle their fleet, sail to Britain to continue the war against Germany or be attacked. With the French refusing to surrender, the attack began and did successfully cripple the French fleet.

In response to the British attack at Mers-el-Kébir and another at Dakar, the French mounted air raids on Gibraltar. The Vichy government also severed diplomatic relations with the United Kingdom. The attack remains controversial.

The predominant British attitude was that the attack was made out of dire necessity and self-preservation. The French on the other hand thought they were acting honorably in terms of their armistice with Nazi Germany, and were fully convinced they would never turn over their fleet to Germany, and saw the British action as a betrayal.

3. TODAY'S SELF-OBSERVATION
You can never know of course, but my expectation, after some recent turbulence, is a settled period in every sense. Dry weather will allow laundry and garden stuff to be kept on top of. Missus' most recent delusion has been contained - as her delusions are triggered by stress, and since there was none at home, I'm certain a stressful week at school set it off. There's nothing I can do about that, but there's Eid holiday coming and she's been well-rested this weekend, so I'm hopeful for a settling there too.

A quite significant development has been the opening of a "diplomatic channel" with Daughter with both myself and Son. Discussion has in my case been kept to the relatively safe ground of Missus, on which there is common cause. It has been a pleasant relief to exchange information rather than bile.

This channel is in the best interest of everyone, and makes life easier. It also means that Daughter can take up the mantle of care with at least some knowledge of what to do in the event of my death. Son, I fear is simply not ready for such a burden if it fell on him. He would have the willingness but not the patience or organization. Let's hope I outlive Missus - that is in the best interest of all.

4. TODAY'S QUESTION FOR YOU
How well are you responding to change?

5. TODAY'S WEATHER IN BRADFORD
In brief
Mainly dry with clearing skies from noon and a stiff westerly breeze 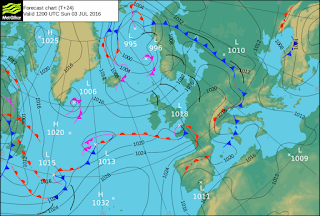 6. TODAY'S ONELINER
My first workout back at the gym was great... I did 15 mins of cardio, 10 mins on the defibrillator, and then 3 days in the hospital. :D

8. TRIVIA
The Outer Space Treaty of 1967 regulates international space law. It states that outer space is free to explore for all nations and that no one can claim it. It also bans deploying nuclear weapons in outer space.

9. ZEN WISDOM
It is not knowledge but knowledge how to use knowledge that is power.
Posted by Gary Blonder at 01:56