1. ON THIS DAY IN HISTORY4th July 1941: The Lviv Professors Massacre
25 Polish academics from the city of Lwów (since 1945 Lviv, Ukraine) were killed by Nazi German occupation forces along with their families. By targeting prominent citizens and intellectuals for elimination, the Nazis hoped to prevent anti-Nazi activity and to weaken the resolve of the Polish resistance movement. According to an eyewitness, the executions were made by an Einsatzgruppen unit (Einsatzkommando zur besonderen Verwendung) under the command of SS-Brigadeführer Karl Eberhard Schöngarth with the participation of Ukrainian translators, who were dressed in German uniforms.

Before September 1939 and the joint Nazi-Soviet invasion of Poland, Lviv ( was the home for many Polish and Polish Jewish intellectuals, political and cultural activists, scientists and members of Poland's interwar intelligentsia.

After Lviv was occupied by the Soviets in September 1939, Lwów University was renamed in honor of Ivan Franko, a major Ukrainian literary figure who lived in Lviv, and the language of instruction was changed from Polish to Ukrainian. Lwów was then captured by German forces on 30 June 1941 after the German invasion of the Soviet Union. Along with German Wehrmacht units, a number of Abwehr and SS formations entered the city. During the Nazi occupation, almost all of the 120,000 Jewish inhabitants of the city were killed, within the city's ghetto or in Bełżec extermination camp. By the end of the war, only 200–800 Jews survived.

To control the remaining population, prominent citizens and intellectuals, particularly Jews and Poles, were either confined in ghettos or transported to execution sites such as the Gestapo prison on Pełczyńska Street, the Brygidki Prison, the former military prison at Zamarstynów and to the fields surrounding the city — in the suburb of Winniki, the Kortumówka hills and the Jewish Cemetery. Many of those killed were prominent leaders of Polish society: politicians, artists, aristocrats, sportsmen, scientists, priests, rabbis and other members of the intelligentsia. This mass murder is regarded as a pre-emptive measure to keep the Polish resistance scattered and to prevent Poles from revolting against Nazi rule.

The massacres were part of the infamous "AB-Aktion" pacification plans, one of the early stages of Generalplan Ost, after the German campaign against the USSR started and the eastern half of prewar Poland fell under German occupation in place of that of the Soviet Union.

The massacre was ordered by the highest level of the Third Reich authorities. The direct decision maker concerning the massacre was the commander of the Sicherheitspolizei (Befehlshaber der Sicherheitspolizei und des SD- BdS) in Krakau District Generalgouvernement, Brigadeführer Karl Eberhard Schöngarth. The following Gestapo officers also participated: Walter Kutschmann, Felix Landau, Heinz Heim (Chief of Staff Schöngarth), Hans Krueger (Krüger) and Kurt Stawizki. None of these were ever punished for their roles in the Lviv massacre. Kutschmann lived under a fake identity in Argentina until January 1975, when he was found and exposed by journalist Alfredo Serra in the resort town of Miramar. He was arrested ten years later in Florida, Buenos Aires, by Interpol agents but died of a heart attack in jail before he could be extradited, on 30 August 1986.

New Followers followed back = 10
@EdwardParker11, @MaliaDArnold, @BlackHalt, @JusticeEagan, @Love9518fhhjguy, @LeandroTaub, @ThomasMackey12, @ThomasMackey13, @divyasuman3, @racquelcourtneySpammers not followed back = 2@DLB_Music_Promo, @MotivationDojo
3. TODAY'S SELF-OBSERVATIONAfter recent events, I now send Missus off to work with some trepidation, hoping she doesn't hear a police siren! However, there's nothing I can do about sirens or how loopy Missus interprets them, only manage her behaviour to the best of my ability. That much I think I can congratulate myself on so doing. When shit goes down, there has to be acceptance and the right response. I am most pleased with myself that I am currently doing that well.

Though I am possessed by Time Greed, and never have enough, the reality is that today I have abundant time to achieve everything I need to do, and unless something comes up, absolutely no excuse not to! Primal, personal, domestic, client and Missus needs can all be met today, and I've every intention of doing so. I see this avatar as a meme-spreading and difference-making machine, and I feel profoundly grateful to that its purpose being fulfilled to the max.

4. TODAY'S QUESTION FOR YOU
Do you know your purpose, and are you fulfilling it?

5. TODAY'S WEATHER IN BRADFORD
In brief
Dry with sunny periods - heavy rain in the evening 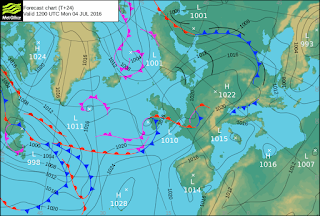 6. TODAY'S ONELINER
I GOT MY MIND SET ON YOU
but it's gonna take Viagra!

8. TRIVIA
Rats laugh when they are tickled

9. ZEN WISDOM
When you can listen with your whole being all day, your you can watch your life successfully running itself
Posted by Gary Blonder at 23:19