1. ON THIS DAY IN HISTORY
7th July 1947: The Roswell Incident
The Roswell UFO incident according to the official record was a United States Air Force surveillance balloon crashing at a ranch near Roswell, New Mexico, prompting claims alleging the crash was of an extraterrestrial spaceship, a claim printed the next day in the Roswell Daily Record newspaper.

After an initial spike of interest, the military reported that the crash was merely of a conventional weather balloon. Interest subsequently waned until the late 1970s when ufologists began publishing a variety of increasingly elaborate conspiracy theories, claiming that one or more alien spacecraft had crash-landed, and that the extraterrestrial occupants had been recovered by the military who then engaged in a cover-up.

In the 1990s, the US military published reports disclosing the true nature of the crashed Project Mogul balloon. Nevertheless, the Roswell incident continues to be of interest in popular media, and conspiracy theories surrounding the event persist. Roswell has a thriving tourist industry as a result of the incident and subsequent conspiracy theories.

3. TODAY'S SELF-OBSERVATION
So far it's been a good week, happy and fulfilling, and it's a case of keeping on doing what I do. Time continues to whizz by but I have come to an acceptance of it. I'm very conscious of the increasing fragility of my body, muscles in particular that strain all-too-easily. I just have to keep moving smoothly, gently and steadily.

My mind of course has always been fragile but I have learned to look after it, and I'm very grateful that it's currently enjoying circumstances where it can thrive, allowing awareness to be liberated and life-purpose to be fulfilled. Every moment I have a difference I can make.

4. TODAY'S QUESTION FOR YOU
Are you conscious of the difference you are making? 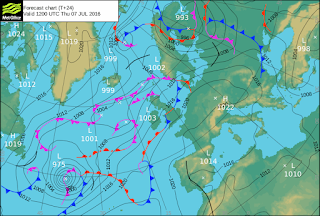 8. TRIVIA
In Mayan civilization, cacao beans were the currency, and counterfeiting cacao beans out of painted clay had become a thriving industry. Goods could be priced in units of cacao: a slave cost 100 beans, the services of a prostitute cost 10 beans, and a turkey cost 20 beans. While the Spanish conquistadors horded gold, the Mesoamericans horded cacao beans. In some parts of Latin America, the beans were used as a currency as late as the 19th century.

9. ZEN WISDOM
Only those who've known darkness know light when they see it.
Posted by Gary Blonder at 23:25