It was signed on 19 February 1674 by Charles II of England and ratified by the States General of the Netherlands on 5 March 1674. Charles was forced to sign the treaty as Parliament would not allow more money to be spent on the war and had become aware of the secret Treaty of Dover in which Charles had promised Louis XIV of France to convert to Catholicism at an opportune moment. The English were dismayed by the unexpected fact that Dutch raiders managed to capture more English ships than vice versa and that New Amsterdam had been retaken by the Dutch in 1673.

Most of the initial peace conditions demanded by the English in the Accord of Heeswijk of 1672 were not met, but the Dutch paid two million guilders (down from an original demand of ten million) to be paid over a period of three years (basically to compensate for the loss of French subsidies) and again affirmed the English right of salute, their Dominium Marium from Land's End northward to Staten Land. This was qualified by the condition that Dutch fishery would in no way be impeded by this right. The treaty conditions of 1668, regulating trade and shipping, were reconfirmed. As regards territorial disputes, the treaty was a typical "as we were" arrangement: New York (captured by the Dutch) and Surinam and some West Indies islands (captured by the English) were exchanged back to their original owners.


As the peace could not be communicated quickly to all parts of the world, different dates had been determined upon which legal hostilities would end. From the Soundings to the coast of Norway, fighting should end by 8 March; south to Tangier by 7 April; from there to the Equator by 5 May and in the rest of the world after 24 October 1674.


3. TODAY'S SELF-OBSERVATION
I occasionally suffer "semi-insomnia" - this is when I sleep well half the night but the become wide awake too early. It's one of many ways where my bodymind does its thing without my consciousness having much say in it.

Getting a boner without the aid of the magic blue tablet is now a rarity and you feel almost duty-bound not to waste it. What I've learned however is that it is also a mistake to indulge the post-urine variety, and for the same reason - it will take forever and everything gets very sweaty. Afterwards, you will be wide-awake at an ungodly hour.

I'm fairly self-forgiving these days in new situations where you learn by doing. I have now learned that next time I get a post-urine boner, just to be grateful I can still get one, and leave the thing alone! I will then sleep well and can indulge the primal at a better hour.

A further middle-age symptom is muscular fragility - in January I learned the hard way not to move heavy objects with my foot, because it tears knee ligaments. This is not the first time I've torn one, and as well as being painful, you're now looking at two months to heal. This means lost exercise and extra bus fares for journeys where I would have hoofed it.

With head-hair, penis, muscles, ears, mental autopilot and eyes showing the signs of ageing, I have one remaining physical faculty still going strong - my Rottweiler immune system! I very rarely get ill, and bounce back quickly from new savage strains. This is partly genetic and partly low-stress and good mind-management, meaning that energy is not diverted by adrenalin.

This ties back into not "indulging" in the night - sleeping well is essential to healing and keeping the immune system on top-form.

4. TODAY'S QUESTION FOR YOU
Are you learning from your experiences? 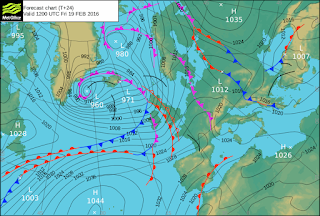 7. NOW THAT'S FUNNY!
Sarah Tiana on being an older single

8. TRIVIA
Under certain conditions, wolves can hear as far as six miles away in the forest and ten miles on the open tundra.

9. ZEN WISDOM
It is this time and this place that matter not some other time or place. What matters is here and now - and the people here and now.
Posted by Gary Blonder at 23:06